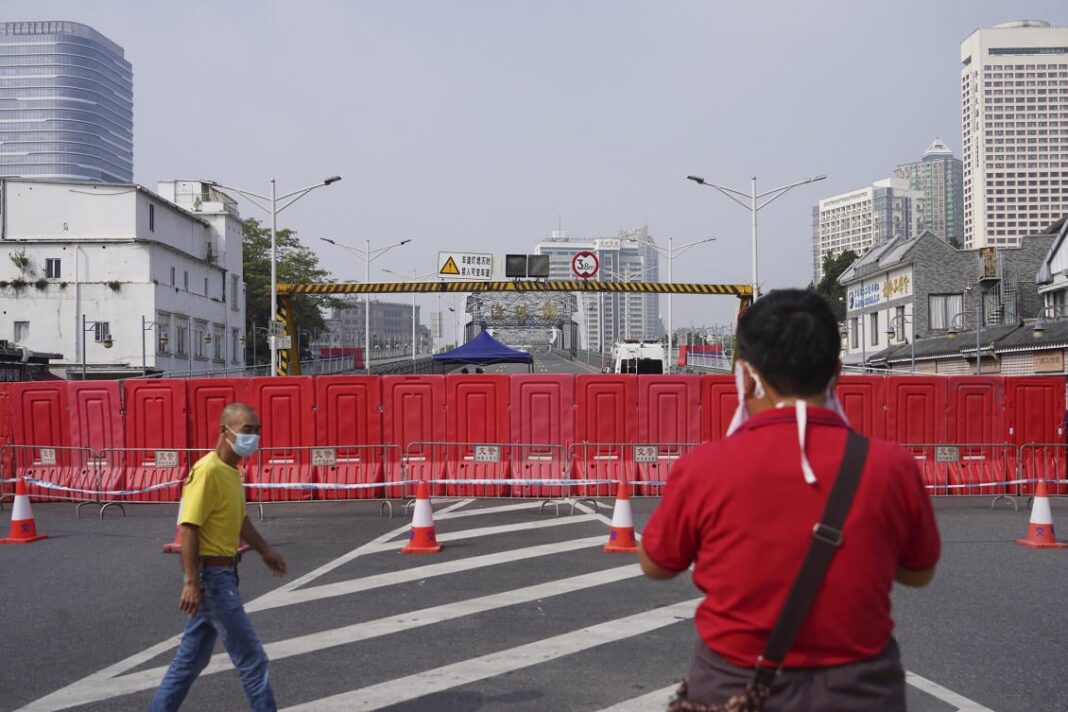 BEIJING: Protesters in southern China clashed with police in a rare display of public opposition to anti-COVID measures, videos posted online showed, after lockdowns in the area were extended over a surge in infections.Videos circulating on social media since Monday night and verified by AFP showed hundreds taking to the street in the industrial metropolis of Guangzhou, some tearing down cordons intended to keep locked-down residents from leaving their homes.A few scuffled with officials in hazmat suits.”No more testing,” protesters chanted, with some throwing debris at police.Another video shows a man trying to swim across a waterway that separates the affected district of Haizhu from the neighboring area, with passers-by suggesting the man was trying to escape the lockdown.The district of more than 1.8 million residents has been the source of the bulk of Guangzhou’s COVID-19 cases.Officials announced the first snap lockdown there in late October, targeting dozens of residential neighborhoods.And on Monday, a lockdown order covering nearly two-thirds of the district was extended until Wednesday night.City officials launched mandatory mass testing in nine districts last week, as daily case numbers rose above 1,000.The megacity of more than 18 million people reported nearly 2,300 cases on Tuesday, most of them asymptomatic.China is the only major economy sticking to a zero-Covid strategy to stamp out virus clusters as they emerge, but swift and harsh lockdowns have battered the economy.Under the policy, thousands of residents can be locked down over just one positive case in their housing complex.But a torrent of lockdown-related scandals — where residents have complained of inadequate conditions, food shortages and delayed emergency medical care — have chipped away at public confidence in the policy.Dozens of people took to the streets in southern tech hub Shenzhen in September after officials announced a snap lockdown over a handful of COVID cases.And earlier this year, a gruelling two-month lockdown in Shanghai — the world’s third most populous city with more than 25 million residents — saw widespread food shortages, deaths due to lack of access to medical care, and scattered protests.On Friday the government announced some relaxation of the measures, cutting quarantine times for inbound travelers and scrapping the requirement to identify and isolate “secondary close contacts” — those who may have come into contact with infected people.