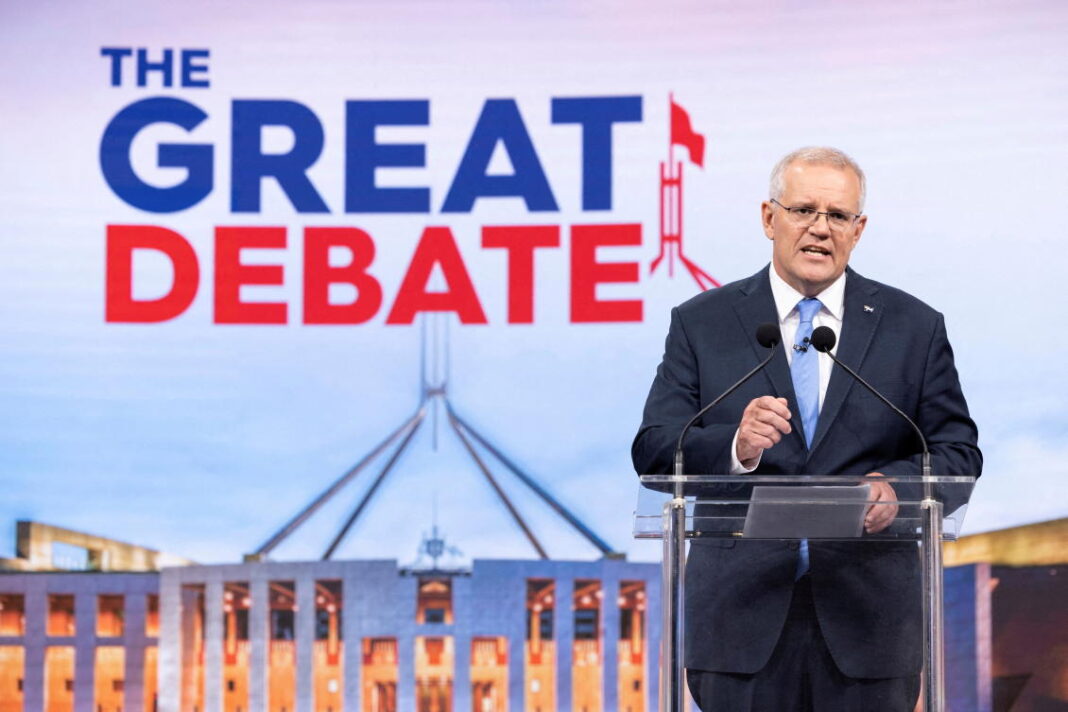 SYDNEY: Australia’s Prime Minister Scott Morrison said Saturday he will “empathize” much more if he wins May 21 elections but was accused by the opposition of making a desperate political maneuver.
Morrison, whose conservative government lags in the opinion polls a week before the vote, admitted a day earlier that he had been a “bulldozer” to get things done during the Covid-19 pandemic.
“I know there are things that are going to have to change with the way I do things because we are moving into a different time,” he added.
On Saturday, Morrison renewed his promise of personal change.
The Australian leader said he would seek to “explain my motives and my concerns and empathize a lot more — but I tell you what, at the end of the day what matters is I get the job done.”
Morrison said he had to make unpopular decisions and act quickly during the pandemic, adding: “I am looking forward to changing the gears of our government.”
It is a change from the campaign stump message he has delivered to voters until now: “You may not like me,” coupled with a summary of his plans and achievements, notably fighting the virus and boosting the economy.
A Newspoll released Friday showed the opposition Labour Party leading the ruling Liberal-National Party coalition by 54-46 percent on a two-party basis — barely changed from a month ago.
“I don’t believe this prime minister can change. That’s a desperate statement that he made,” opposition Labour Party leader Anthony Albanese told reporters.
The opposition leader also reacted angrily to a Sydney Morning Herald report that he had been kept out of the loop during Australia’s negotiations to obtain nuclear-powered submarines in an alliance with the United States and Britain.
US President Joe Biden’s administration had repeatedly asked Morrison’s team to ensure bipartisan support in Australia for the alliance, dubbed AUKUS, the paper said, citing White House officials.
Instead, Morrison reportedly waited more than four months before briefing the opposition on the deal. After being informed, Labor supported the agreement.
“It is extraordinary that the prime minister broke that faith and trust with our most important ally by not briefing Australian Labor on these issues,” Albanese said, adding that he was briefed by officials less than 24 hours before the public announcement.
“This prime minister is always interested in the wedge, always interested in the division and that’s why when he says that all can change, he can’t be trusted,” he added.
“This is a prime minister who always plays short term politics — isn’t interested in the national interest.”
Though both parties have been unofficially campaigning since long before the election date was announced over a month ago, Morrison was due to officially launch his ruling coalition’s campaign in Brisbane on Sunday.