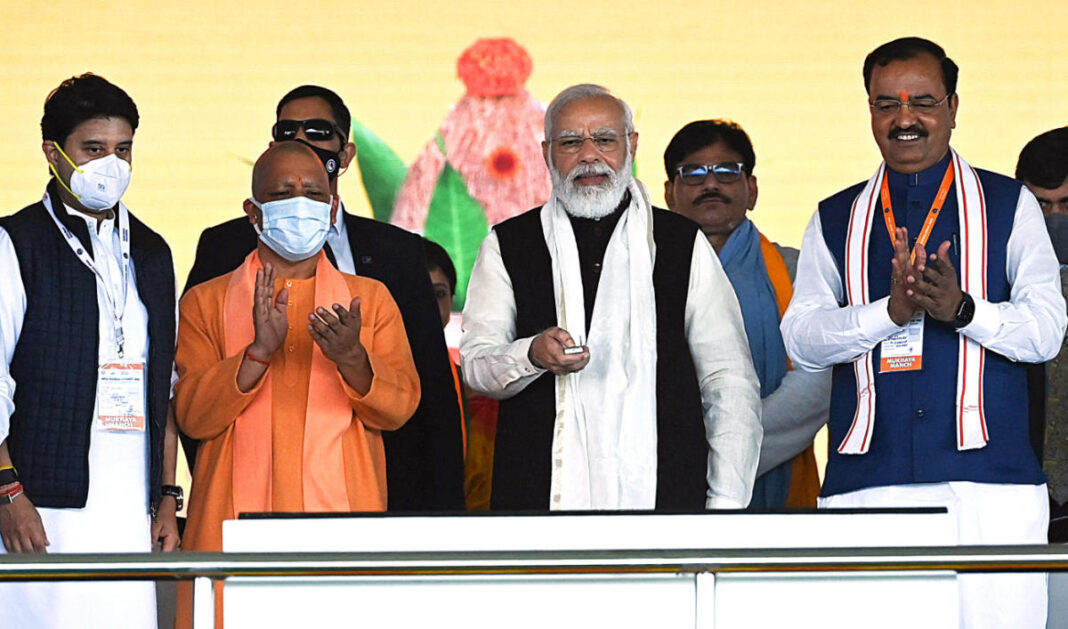 Malaysia bans travelers from countries deemed at risk from omicron

NEW DELHI: Prime Minister Narendra Modi on Thursday laid the foundation stone for a new international airport in the Jewar area near New Delhi, which local authorities expect to become the world’s fourth largest hub upon completion.
Built on over 1,300 hectares, the $4 billion Noida International Airport project is going to be constructed in four phases, with the first phase scheduled to complete by 2024 and serve 12 million travelers
a year.
With the end of the fourth and final phase in 2040, the airport is planned to have a capacity of 70 million passengers.
Located in western Uttar Pradesh state, the airport site is some 70 kilometers from Indira Gandhi International Airport in Delhi.
Its construction had been stalled since 2001 as, according to Civil Aviation Ministry guidelines, an airport could not be constructed closer than 150 kilometers from an existing one. The clause was removed by Modi’s government in 2016.
“India of the 21st century is building modern infrastructure — better rail, better roads and better airports,” Modi said as he laid the foundation stone. “These are not mere infrastructures, but they change and transform the lives of people in many ways.”
The airport site is about 40 kilometers away from the industrial town of Noida and some 150 kilometers from the city of Agra, which is famous for the Taj Mahal and other historic sites that make it one of the top international
tourist destinations.
“Noida International Airport would be the logistic gateway of north India and it would be a symbol of India’s integrated infrastructure projects,” Modi said.
The airport will have facilities for passengers, cargo, and also aircraft maintenance.
On Thursday, the Uttar Pradesh government advertised the airport on the front pages of the country’s main dailies as the “world’s fourth largest international airport.”
The busiest airports in the world include Beijing Capital International Airport and Hartsfield-Jackson Atlanta International Airport in the US, both of which recorded over 100 million travelers before the pandemic.
Indian aviation experts said the new hub would decongest
Delhi airport.
“India has lagged behind in growth, particularly in terms of flights,” Jitendra Bhargava, civil aviation expert and former managing director of Indian Airlines, told Arab News.
“Airports were renovated or expanded, but they were not on the scale of international airports because of land constraints. This will boost tourism traffic in Uttar Pradesh and help in developing this underdeveloped state.”
Uttar Pradesh, the most populous state where local polls are slated for early next year, is seen as crucial for the ruling Bharatiya Janata Party’s victory in general elections in 2024, as it sends the largest number of legislators to the lower house of parliament.
The government has been facing a backlash in the state, where farmers — the most influential voting bloc — have been protesting for over a year against new farm laws deregulating the agricultural sector.
Last week, Modi said the laws would be withdrawn.
“You have to see the timing of the inauguration of the airport,” Noida-based political analyst Satish Kumar Singh told Arab News.”Modi has been on an inaugural spree in Uttar Pradesh in recent weeks. In (the) eastern part of the state he inaugurated a new expressway, a new university and something more. They would not like to lose UP at any cost.”
584Words|3606Characte

Malaysia bans travelers from countries deemed at risk from omicron