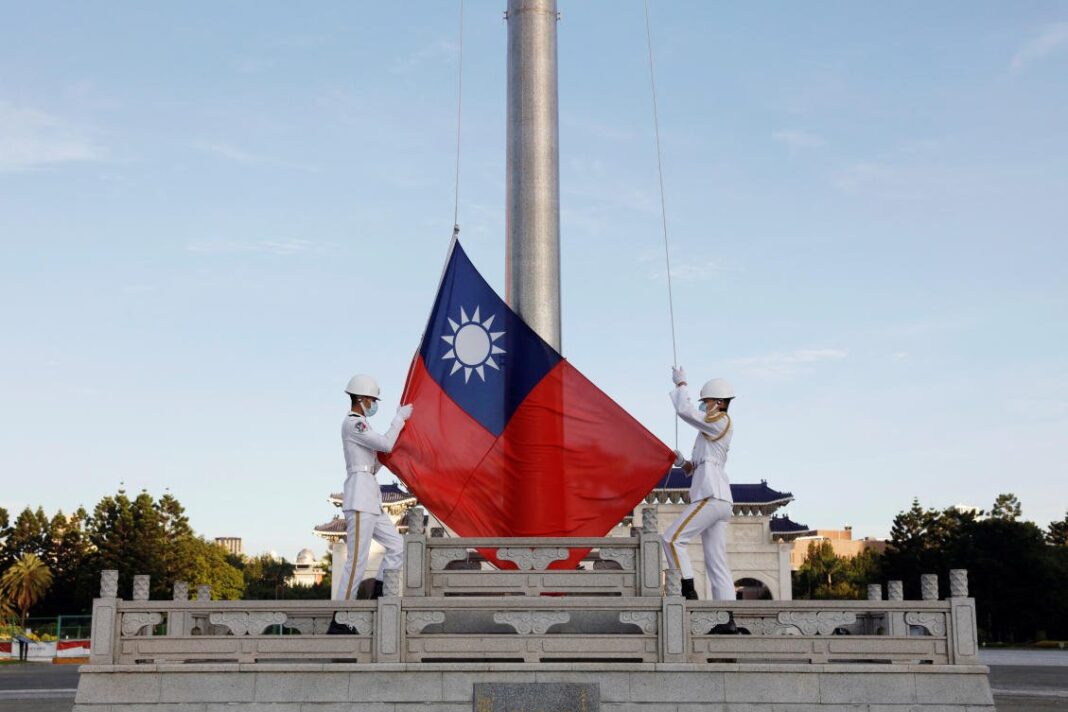 Taiwan accused the Chinese army of simulating an attack on its main island Saturday, as Beijing continued its retaliation for US House Speaker Nancy Pelosi’s Taipei visit.Relations between the two superpowers nosedived following Pelosi’s trip to China’s self-ruled neighbor — which it claims as its territory — prompting calls from the UN for an urgent de-escalation of tensions.Beijing maintained some of its largest-ever military drills around Taiwan on Saturday — exercises aimed at practicing a blockade and ultimate invasion of the island, analysts say.Taipei said it observed “multiple batches” of Chinese planes and ships operating in the Taiwan Strait, some of which crossed a demarcation line that divides the strait, but which Beijing does not recognize.”They were judged to be conducting a simulation of an attack on Taiwan’s main island,” it said.The democratic island’s military mobilized air and land patrols and deployed land-based missile systems in response, the defense ministry said in a tweet.US Secretary of State Antony Blinken, meeting with his Philippine counterpart on Saturday, said Washington was “determined to act responsibly” to avoid a major global crisis.

Climate change conrcerns The environment became the latest victim of the geopolitical jousting a day earlier, as Beijing said it would withdraw from a series of talks and cooperation agreements with Washington — most notably on climate change and defense cooperation.China should not hold talks on issues of global concern such as climate change “hostage,” Blinken said, as it “doesn’t punish the United States, it punishes the world.”In a bid to show just how close China’s forces have been getting to Taiwan’s shores, Beijing’s military overnight released a video of an air force pilot filming the island’s coastline and mountains from his cockpit.And the Eastern Command of the Chinese army shared a photo it said was taken of a warship patrolling in seas near Taiwan, the island’s shoreline clearly visible in the background.Taiwan’s army released images on Saturday of one of its frigates monitoring a Chinese ship within touching distance, and soldiers activating its land-based missile systems.The drills have also seen Beijing fire ballistic missiles over Taiwan’s capital, according to Chinese state media.Beijing said it would also hold a live-fire drill in a southern part of the Yellow Sea — located between China and the Korean peninsula — from Saturday until August 15.Taiwan has remained defiant, insisting it will not be cowed by its “evil neighbor.”

International outrageThe scale and intensity of China’s drills have triggered outrage in the United States and other democracies, with the White House summoning China’s ambassador to Washington to rebuke him over Beijing’s actions.Blinken and the foreign ministers of Japan and Australia issued a joint statement calling on China to halt the exercises after meeting on the sidelines of an Association of South East Asian Nations (ASEAN) summit in Cambodia.Beijing’s decision to withdraw from hard-won cooperation on climate change has now sparked wider fears about the future of the planet.It’s “impossible to address the climate emergency if the world’s number one and number two economies and number one and number two emitters are not taking action,” Alden Meyer, a senior associate at E3G, a climate-focused think tank, told AFP.National Security Council spokesman John Kirby told reporters in Washington the decision was “fundamentally irresponsible.”UN Secretary-General Antonio Guterres warned the two superpowers must continue to work together — for the world’s sake.”For the secretary-general, there is no way to solve the most pressing problems of all the world without an effective dialogue and cooperation between the two countries,” his spokesman Stephane Dujarric said.

Risk of military conflict With tensions over Taiwan having risen to their highest level in nearly 30 years with an elevated risk of military conflict, experts told AFP the latest downturn in relations between the two superpowers could be long-lasting.The suspension Friday of bilateral military and maritime dialogue while China continues its military exercises was “particularly worrisome,” said Bonnie Glaser, a China expert at the German Marshall Fund.”We don’t know what else they will do,” she said. “We just don’t know if this is just a temporary thing.”John Culver, a former CIA Asia analyst, said in a discussion hosted by the Center for Strategic and International Studies that Beijing’s main purpose with its military exercises was to change that status quo.”I think that this is the new normal,” Culver said.”The Chinese want to show… that a line has been crossed by the speaker’s visit.”

The deputy head of Taiwan defense ministry’s research and development unit was found dead on Saturday morning in a hotel room, according to the official Central News Agency.Ou Yang Li-hsing, deputy head of the military-owned National Chung-Shan Institute of Science and Technology, was found dead in a hotel room in southern Taiwan on Saturday morning, CNA reported. It said authorities were looking into the cause of death.Ou Yang was on a business trip to the southern county of Pingtung, CNA said, adding that he had assumed the post early this year to supervise various missile production projects.The military-owned body is working to more than double its yearly missile production capacity to close to 500 this year, as the island boosts its combat power amid what it sees as China’s growing military threat.